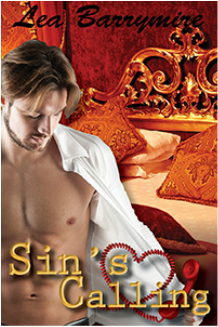 Victoria is first and foremost a business owner, working to help her sister and brother demons work within the confines of their nature. She’s also a succubus, created by a Maker and revered for her demon perfection. The latter being something she despises with her whole heart. As she works to free others like her from the daily need to feed from sexual partners she stumbles across her mate. Now she’s fighting destiny and the call of his lust, refusing to sate her need on the one male made for her.

Dominick is a technowizard used to living his life his way. When he arrives at a business meeting and senses his mate he’s intrigued. When she slams walls up around herself and refuses to even look at him he goes on the prowl. He uses her sex phone business to get her attention, but can he keep her on the line long enough to capture her heart?

4 of 5 Stars: The Jeep Diva Review

Victoria is a succubus, a sex demon that must feed on the emotional and sexual energy of humans to survive. Not born to the life, but turned years ago, her guilt and disgust with her demonic side have kept her isolated and alone: it is safer that way for others. Lea Barrymire has cleverly incorporated a very un-demonlike succubus and given her a heart and a palpable loneliness that is as endearing as it is understandable.

To combat her need to feed, and provide a service for other succubi and incubi that also prefer to remove the risk to others from their feeding frenzies, she created a phone-sex service that keeps her employees fed and paid, and the humans safe.

When she does a favor for a long-term employee and takes a client, she doesn't realize the impact that Nick, a techno wizard will have on her: but his voice is addictive, and his realization of what she is, without fear or apparent concern is refreshing, if confusing.

What Victoria doesn't realize is that Nick is her mate - and they are destined to be together, despite her concerns that she will not be able to control her demonic urges. What follows is a delicate dance and courtship, mixed in with some of the most erotically charged phone sex and some incredibly steamy scenes when the two finally meet.

Barrymire has created a story that has some clever twists and turns, a unique succubus at the heart of the story, and mixed in a wizard who is as sexy as he is determined to show his woman that she is worth every bit of emotion he shares with her.

I received an eBook copy from the publisher for purpose of honest review for the Jeep Diva. I was not compensated for this review: all conclusions are my own responsibility.