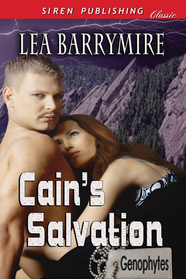 “Please, ladies and gentlemen, take your seats. We’ll start the presentation and auction in just about ten minutes.”

The main conference room at Genotech Global was full to capacity with men and women looking to attend the biological event of the millennium. There were computers and flat-screen televisions lining three of the walls. Attendees not able to participate in person were given the ability to connect via the Internet. The room could easily accommodate two hundred people when tables and chairs were used, but with the tables removed, the Genotech staff had crammed three hundred fifty chairs into the space. Every single seat had brought in a $4,000 fee for attendance. Even the people calling in or participating via technological methods were required to pay the fee.

Teresa peeked out from behind the curtain strung along the entryway she and Adam would be using to enter the room. Nervous energy skated down her spine as she caught a glimpse of the people slowly making their way to their seats. She anxiously reached up and touched the tight French knot on the back of her head. She’d spent an hour twisting and tucking her blonde hair into the hairdo. Smoothing sweaty hands down her tailored gray suit helped soothe her nerves. This whole advertising stunt of bringing Adam and his brothers out to the public through an open auction was a gamble.  She was sure that tomorrow morning the papers would be full of reports about human atrocities and such, but for tonight, she was going to be the queen of the ball.

“Are you ready, Adam?” Teresa asked. She glanced up to check on her star creation and again marveled at his chiseled features. He was six feet three inches of genetic perfection. He had blond hair, crystal-blue eyes, and a tiny dimple that graced his right cheek. His combat training rivaled any hardened military soldier, and he had enhanced strength that no mortal man could challenge. Adam was the monetary savior for Genotech Global. Without him and his brothers, there would be no company left. They had taken a gamble and sunk every last dollar into creating the superhuman soldiers that Adam was representing tonight. He was the first of many that would be contracted out to the highest bidder.

“Sure, Doc. I’m always ready,” Adam answered. His icy-blue eyes observed the people with a calm, emotionless gaze. He was dressed in all black, T-shirt and cargo pants stretched taut across impressive musculature. He had submitted a request to carry weapons tonight, but had been denied. Instead, he was sporting a small microphone and communications device in his ear to facilitate his interactions with the crowd.

“Good. Do you have any questions about this evening? I know we’ve gone over the itinerary, but I want to make sure you know what you’re supposed to do.” Teresa turned once more to glance out into the crowd. So many people and so many high-ranking individuals walked through the hall. The thrill of the potential income made her tingle with anticipation. She caught herself reaching up to check her hair again and stopped, admonishing herself for the nervous action.

“Doc, you know I have a photographic memory. I know every word you’re going to speak, every turn you’re going to take. I’m all set. Don’t be nervous. I’m not.” Adam turned calm eyes on Teresa and smiled pleasantly at her.

“Of course you aren’t nervous. You were built that way,” she chided. She took a deep breath. “Okay, I’m heading out there. Wish me luck.”

“Welcome. My name is Dr. Teresa Robinson. You’ve all been individually invited to attend tonight’s event. What we unveil tonight will have a huge impact on your lives or the lives of your contacts,” she said as she walked to the podium. The lights within the room slowly dimmed as she spoke. The screen behind her suddenly shone with the faces of Adam and Benjamin. The men were beautiful in their maleness. The title said it all. Genophytes, the Soldiers of the Future.

“I’m going to take the next few minutes to explain what we’ve been doing at Genotech Global over the last decade and a half. Most of you know that the Human Genome Project was undertaken in the late eighties. That project was to map the genes found in the normal genetic pattern for humans. Genotech Global had been included on the list of companies working on the genome project. Without getting into the scientific mumbo jumbo, by 2001 my team and I had designed a process of mapping and testing functionality for each gene as we mapped it. We stumbled across some interesting genes that we had hoped to manipulate later to help humankind. In 2003 we started working with one of the genes that is normally inactive in humans and found that it controlled mental abilities such as telepathy, psychic empathy, and psychokinesis.”

As she spoke, Teresa watched the faces of the people sitting in front of her. Most were listening, but once she uttered the last sentence, every single face in the audience breathed in an exclamation of shock. Oh, just wait.

“In 2008 we had perfected many of the inactive genes, or had manipulated existing active ones, to do exactly what we wanted them to do.” She kept her voice steady and signaled the slide to change to the photo of Alpha. She turned and pointed to the screen. “That is Alpha. He was created, or conceived, in 2008 and hit his biological adult age in eighteen months. Through gene manipulation, we’ve been able to control the growth rate of human cells. We have manipulated this gene to not only accelerate growth from fetal to adult phases within months, but have been able to then stop the growth and degeneration of the cells throughout the body. Alpha is the first of his kind. Since his birth and subsequent adulthood, we’ve conceived more men with these same types of genetic foundations. We’ve named all of the beings created ‘genophytes,’ as they are not normal human men anymore, but the first of their kind. Genetically perfect individuals both designed and conceived in this facility.”

Absolute silence hung in the large room. She chuckled under her breath. Here we go.

“Along with gene manipulation, we’ve worked hand in hand with Dr. Klabor in developing neuron-stimulating technology. Through his work, we’ve been able to produce amazing results in memory building. All of our genophytes have been given years of education and memories through these techniques. We’ve worked tirelessly to create the most comprehensive memory banks and programs to provide the genophytes knowledge in many areas. We have programs covering anything from hand-to-hand combat to piloting the most sophisticated military aircrafts. I’d like you to meet the man of the hour, the one you all came to see. Let me introduce you to Adam, the first fully ready genophyte.”

Pandemonium erupted as Adam came around the curtain and walked with animalistic grace to the podium. He glanced around the room and calmly took in the surroundings.

“Please, please. Take your seats, and I’ll explain everything. Each of you has an envelope taped to the bottom of your seat that contains a flyer. This will explain the possible characteristics of our men. I’ll go through them quickly now, but if you don’t win the bid tonight, know that we already have five more soldiers ready for contract work. Also, as I said, we can create the ultimate in security personnel in eighteen months. If you don’t like what you see, you can select your own soldier’s characteristics.”

Teresa signaled for the next slide to show on the screen as everyone settled down and reached below their seats. She’d known they would need something to focus on once everyone understood what she and her team had accomplished. The human mind could only take in and assimilate so much information before going on overload. The envelopes worked as a great distraction.

Adam watched Dr. Teresa Robinson walk into the room buzzing with activity and excitement. He understood the ramifications of this evening, but as the doctor so easily commented, he was biologically engineered with a reduced ability for emotions. It was an asset in the work that he would soon be contracted to perform, or at least the people that designed his DNA thought so. He scowled at the thought that not having highly developed emotions might be detrimental in his extended life span, but rather than ponder the issue, he felt nothing but vague intrigue.

Adam took two steps forward and stared out over the crowd, focusing on a spot at the back of the room. He felt a flutter of something in his belly, but knew it couldn’t be nervousness. He was well versed in his attributes and had gone through rigorous testing to assess his abilities. He kept his telepathic ability on lockdown to keep out the thoughts of the hundreds of people sitting in front of him.

“Adam has enhanced strength, vision, hearing, and smell. He’s also been designed to heal faster and age much slower than normal humans. He has been designed to have almost no emotions or desires beyond accomplishing his assignments. The only emotions we have enhanced are anger and pride, as they are necessary evils in most combat situations. He’s also been given the abilities of telepathy and psychokinesis. Now, yes, I’m assuming most of you will want tests and certified results. We’ve certified all of his abilities and will offer those papers to the winner of tonight’s bid. Adam has been trained in all forms of combat and is also very astute at logistical battle planning. You’re here tonight to witness the first open bidding on contracts for a genophyte. Adam will work exclusively for the winning bidder for a specific time frame. We will run a short film to demonstrate his abilities, and then we’ll start the bidding for a five-year contract at twenty million dollars.”

The noise in the room rose to deafening levels in seconds. He continued to stare over the assembled throng. His heartbeat raced a little more than normal. It concerned him, but not enough to bring it to anyone’s attention. Once the presentation was over he would bring it up with his handler.

Cain's Salvation is available now at Amazon and B&N